Teleoperation is often assumed to be a degenerate case of autonomy–because in the 1960s if it was too hard to program an autonomous capability (called taskable agency), then you were forced to have the human in the loop. Roboticists refer to having a person involved as human supervisory control, which is now a very wide and diverse field.  But many applications of robots are about giving a person real-time remote presence into a distal environment (where the human can’t directly see the robot or the environment). For example, telecommuting, telemedicine, and disaster response are all about a human being able to remotely see and act in real-time. Historically, the robot is called the telefactor and the human, the teleoperator, but that terminology is rare now. A telefactor is often called a “waldo” after Heinlein’s short story, Waldo. The user interface for teleoperation is obviously critical to the success of teleoperation. Telepresence refers to immersive interfaces for teleoperation; these have cognitive advantages for the operator but in practice require too much sensing or bandwidth to be practical. The best example of telepresence is the movie Avatar, though the telefactor was biological.

Originally, the big challenge in teleoperation was latency, as NASA was trying to teleoperate robot arms in space from ground control on earth with seconds of communication delays. Now with the emergence of telecommuting and telemedicine with high speed internet, the research challenges are about how to make the robot a good partner. For example, a cowboy doesn’t have to tell a horse “leg up, leg down” but sets the speed (kicks the horse with spurs) and the horse figures out the best gait for the terrain that meets the goal. And in many movies (and real life), the horse is often smarter than the cowboy– neighing to alert the rider to the presence of angry Indians, snakes, and other bad situations.

Now the big challenge in teleoperation is human-robot interaction of shared autonomy: the user interface, what portions of the task the robot does itself, and, as illustrated by the fantastic story Sanjeev and Robotwallah where it places the human in the sociotechnical organization. For example, Predator pilots working out of Nevada have higher stress that soldiers in the actual war zone. The pilots may be physically safer but the work is very fatiguing and they have less comraderie and are expected to just “turn off” the war and go home.

Winner of 1945 Retro Hugo Award for Best Novella Learn more about other film and literature on teleoperation here Teleoperation and more...

What it gets right about robots: teleoperation Recommendation: Watch it! It’s a family friendly mash up of Rocky and absentee father... 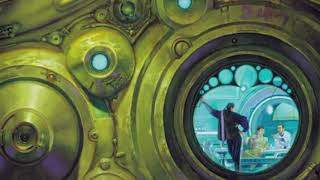 Recommendation: Read this, then read about how it captures what real drone pilots are going through Sanjeev and Robotwallah, the short...
1
23