Learn about what makes robot creepy

The Uncanny Valley is a term used in human-robot interaction to explain why robots sometimes appear to be creepy or unsettling. It was first proposed by Masahiro Mori in 1970 who explained the phenomenon with a graph. The graph is “human likeness” along the x-axis and “familiarity” along the y-axis; familiarity means how comfortable a human is and is a scale from “find it creepy” to “totally comfortable with it.”

Mori had observed that animated toys, puppets, robots, computer animation, all follow the same pattern of eliciting emotional reactions. If they are  fairly primitive in terms of how much like a human that they look, then they are not too creepy. Humanoid robots like Pepper look mechanical and thus signal that they are robots, so mentally they don’t creep us out. But more realistic human-looking robots like Ishiguro’s Geminoid robots (where he builds duplicates of his wife and daughter) are very creepy because while they have high human likeness in appearance, they don’t have corresponding high human likeness in actions. David Hanson’s robot Sophia often is displayed with electronics in the back of her head visible; this reduces the creepiness of a very accurate human face and body but slow and stilted interactions. Mori observed that the more human-like, the more comfortable (graph going up and to the right) up to the point where the appearance was very human-like but the actions or cognition didn’t match or there was one aspect that was just off (like eye movements) and that imperfection would create an overwhelming creepy response in a human. That’s the dip, or valley, in the curve. (Mori’s term - The Uncanny Valley- was probably mistranslated and should be The Valley of Eeriness see @liveScience)

The absolute best, and hysterically funny, explanation of the Uncanny Valley is in the Succession episode of the TV series 30 Rock where the writers try to explain to Tracy Morgan why his idea for an animated video game won’t work. Another fun exposition is http://tvtropes.org/pmwiki/pmwiki.php/Main/UncannyValley, which explains why Cybermen are scarier than Daleks. But the best implications of the Uncanny Valley is Brian Aldiss’ Super-Toys Last All Summer Long 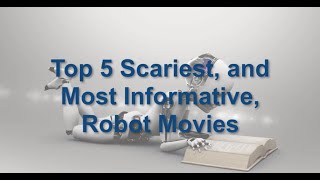 How about a scary scifi robot movie for Halloween? Here are 5 movies you may have missed that offer chills-- and teachable STEM moments...

Saturn 3: A So-Bad-It's-Good Look at the SCARY Uncanny Valley

Hector, played by Harvey Keitel, is one of the creepiest robots ever- providing a great STEM opportunity to discuss robot design, the...

A creepy child robot tells Ben Kingsley and Gillian Anderson “Robots do not lie.” Hmmm...Trust it?

A creepy child robot Tells Ben Kingsley and Gillian Anderson “Robots do not lie" in Robot Overlords (2014). Hmmm...Trust it?

Valentine’s Day is approaching… Do want to sneak in a robot movie to watch on date night? Do you wonder about whether robots and love is...

Are you looking for gift giving ideas for others- from silicon valley software engineers to teenagers, or ideas to put on your Dear Santa...

The Caves of Steel (Isaac Asimov, 1953): Every robot issue that ever will be always has been

Recommendation: Pick up a copy of The Caves of Steel and enjoy a true classic. In 1953, Isaac Asimov spun an odd couple story about a...
1
2